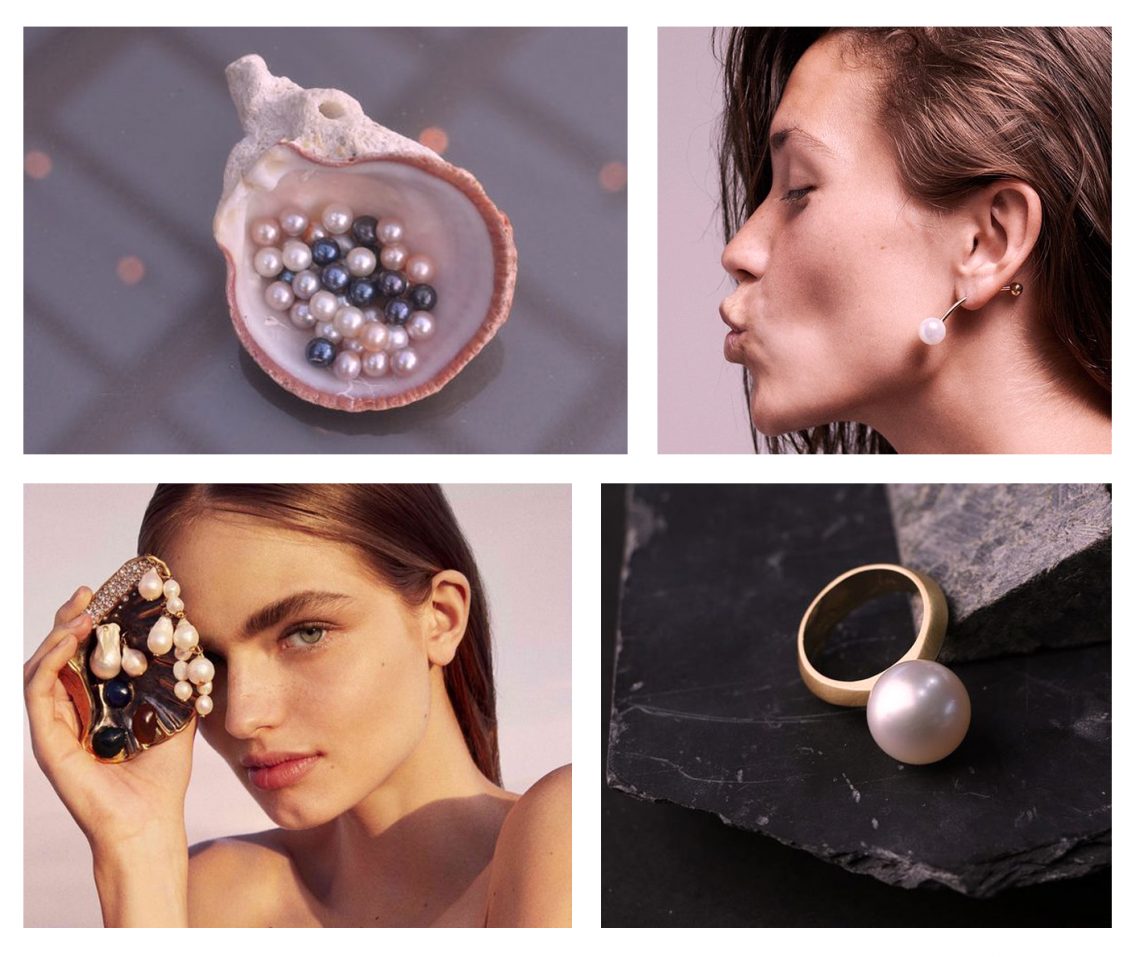 For thousands of years, people throughout the world have treasured pearls. Despite the long history of the gemstone and the great popularity it has today, many people may be wondering, what exactly is a pearl? Though in modern times the gemstones are primarily regarded for their one-of-a-kind beauty, pearls have had many special meanings in various ancient civilizations. Some of these meanings continue to attribute pearl, especially for people born in June, the month which pearls are a birthstone for.

Today, pearls are considered one of the most popular gemstones in the world. Notable women (and fashion icons) including Princess Diana, Jackie Kennedy, and Coco Chanel all wore pearls regularly, showcasing them on the world stage in front of millions of people and helping cement the gemstone as a timeless fashion must-have.

In this article, we take an in-depth look at the gemstone, explaining how pearls are created, their history, the difference between cultured pearls and natural pearls, the different pearl types, and their symbolic meaning. As you learn more about the defining characteristics of the gemstone, you’ll realize just how special these gemstones are.

How are Pearls Created?

Pearls are created by mollusks such as oysters and mussels in rivers and oceans throughout the world. The pearl formation process begins when an irritant gets trapped inside the shell of a mollusk. To protect itself, the mollusk begins to cover the irritant with a crystalline substance known as nacre. After applying thousands upon thousands of layers of nacre over a period of a few years, a pearl begins to develop. Nacre is also referred to as mother-of-pearl and is also seen on the iridescent inside lining of shells on pearl-producing mollusks.

FACT: EVEN WITH IDEAL WATER CONDITIONS, IT CAN TAKE ANYWHERE BETWEEN 2 TO 7 YEARS FOR A PEARL TO DEVELOP INSIDE OF AN OYSTER.

The History of Pearls

It’s believed that humans first discovered pearls in coastal areas while searching for oysters to eat. Ancient Hindu texts, as well as the Koran and the Shu King (an ancient Chinese text written by Confucius), all feature many pearl references. In 2012, French scientists found a pearl that dated back to 5500BC, making it the oldest pearl ever discovered at 7,500 years old. The pearl, now referred to as the Umm al Quwain pearl, was discovered in a gravesite in the United Arab Emirates. Pearls became even more popular during the Roman Empire, though due a rule created by Julius Caesar in first century BC, the gemstones were only reserved for the society’s ruling class. This is despite the fact that only the elite would be able to afford them anyway—according to a Roman historian, a Roman general financed an entire military convoy by selling just one pearl earring.

One reason why pearls were so exorbitantly expensive was because of how rare they were. To collect pearl, divers had to plunge deep into the waters to retrieve oysters, risking their lives for a chance at finding a pearl. In addition, as centuries went on and the demand for pearls continued to rise, the population of mollusks began to dwindle. Fortunately, however, in 1893, a Japanese man by the name of Kokichi Mikimoto found a solution to the problem with the creation of cultured (or cultivated) pearls. Below, we explain the difference between natural and cultured pearls.

READ MORE:  Natural Pearls VS Cultured Pearls: How are They Different?

There are six pearl types: Freshwater, Akoya, Hanadama, Tahitian, White South Sea, and Golden South Sea. While they are all beautiful in their own way, each type of pearl has a unique set of characteristics that make it distinct from the others. Some of the different factors that pearl types vary in include color, size, place of origin, luster quality, and price.

Freshwater pearls are a great choice if you’re looking to buy your first piece of pearl jewelry or want to add a new piece to your collection without spending a large amount of money. These pearls are imported almost exclusively from China and are the most widely available types of pearls. Freshwater pearls range in size from 6 to 13mm and feature many stunning colors including white, pink, and peach.

EACH YEAR, FRESHWATER PEARLS MAKE UP NEARLY 95% OF THE TOTAL PEARL PRODUCTION GLOBALLY.

Akoya pearls have a special place in the hearts of many pearl collectors. Japan, the country where Akoya pearls come from, is highly regarded for the advancement of cultured pearls. Akoya pearls feature a luster (or glow) that is deep and extremely radiant. These pearls range in size from 5 to 10mm. Classic, white Akoya pearls are a must-have in every woman’s jewelry box.

Though Hanadama pearls are a sub-type of Akoya pearls, there is no doubt that they are in their own class. These white pearls are some of the most high-quality pearls that money can buy and truly set the standard when it comes to pearls. Not only do Hanadama pearls feature the highest luster quality out of all the pearl types, but in addition, they also feature impeccable surface quality. If you desire these top-of-the-line pearls, however, you can expect to pay a more significant amount.

Throughout the world, Tahitian pearls are beloved for their unique colors, which feature darker shades of colors including black, blue, and purple. These one-of-a-kind pearls are also typically larger when compared to the other pearl types, ranging in size from 10-15mm. Their name comes from where these pearls are found in French Polynesia.

The most significant characteristic about South Sea pearls, which come from Australia, the Philippines, and Indonesia, is their size and high luster. These pearls are commonly 10-15mm in size, though they can get as large as 18mm. White South Sea pearls have a beautiful silver overtone that when combined with their high luster, creates for a magical look.

READ MORE:  What is Mother of Pearl? Everything You Need to Know

When it comes to special occasions where you want to look your best, there is no going wrong with a classic black dress. The black dress represents a timeless look, and many women are proud owners of at least a few different styles of the fashion essential. Dazzle up your black dress with a pair of jaw-dropping golden South Sea Pearl earrings. The color of the earrings will add a dash of sophistication and panache to your outfit, setting the stage for you to look and feel your absolute best.

The Symbolic Meaning of Pearls

We finish off our coverage of pearls with some very interesting information about the symbolic meaning of the gemstones. One popular belief is that the gemstones symbolize the purity and integrity of the wearer, which is one reason why pearls are often used for bridal jewelry. This potentially stems from the ancient Greek belief that pearls were Aphrodite’s (the goddess of love) hardened tears of joy. According to ancient Chinese culture, pearls symbolize wisdom and knowledge. For others, the meaning of pearls is associated with their physical attributes—many believe pearls symbolize water based on where they come from, or the moon based on their appearance. As mentioned at the beginning of the article, pearls are especially meaningful for people born in June, consider they are one of the three birthstones for the month. The belief is that by wearing your birthstone, you connect with the qualities that your birthstone is symbolic of.

In this article, we have thoroughly examined what pearls are, including different aspects such as their origins, the difference between cultured and natural pearls, the different pearl types, and their symbolic meaning. Pearls are certainly one of the most special gemstones in the world, and by learning more about all of their different qualities, you are able to make a pearl jewelry purchase that you will cherish for decades to come.