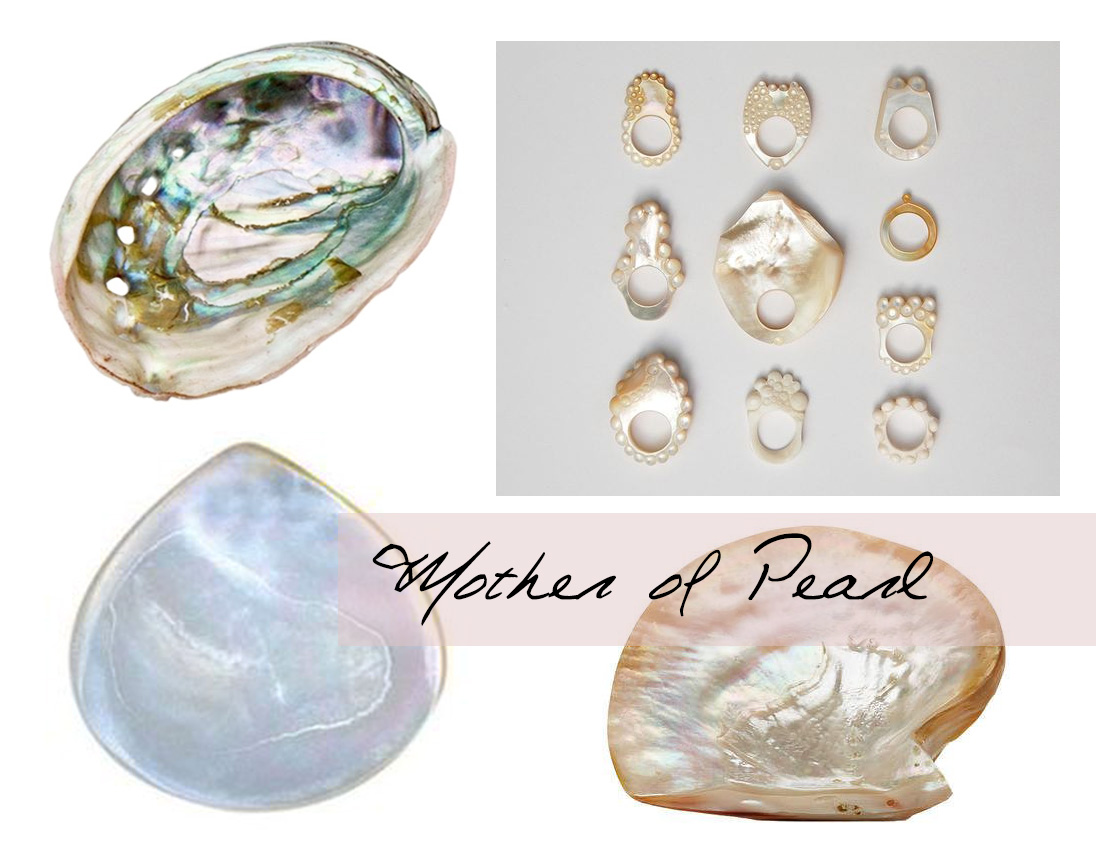 Mother of pearl is the term used for the iridescent substance that forms the inner layer of the shell of some mollusks. It’s often used to make unique pieces of jewelry, among other uses, that have a boho-chic aesthetic. Because of the close relationship between the mother of pearl and pearls, people sometimes confuse the two, though many significant differences exist. In this article, we’ll take an in-depth look at the mother of pearl and cover key points including where it comes from, its different uses, and the ways in which it differs from actual pearls.

The Golden Question: What is Mother-of-Pearl?

Mother-of-pearl is the iridescent inside lining of a mollusk shell. It is most commonly found in three types of mollusks—pearl oysters, freshwater mussels, and abalone. To protect the inside of their shells from parasites and foreign irritants, the mollusk coats it with nacre—an organic substance that gives mother-of-pearl its iridescent effect and distinct beauty. This multicolored iridescence is caused by the way light reflects on the layers of nacre on the shell.

Alluring mother of pearl jewelry is the perfect addition to any outfit, be it casual, smart or dressy. Add instant discreet glow to any look with an iridescent jewelry piece from our Mother of Pearl Jewelry collection, featuring gorgeous earrings, rings and pendants.

Different Uses of Mother of Pearl

READ MORE:  What is a Pearl? A Detailed Look at the Gemstone

The History of Mother of Pearl

In previous centuries, some cultures placed great importance on mother of pearl, sometimes more than pearls themselves. In ancient Egypt, mother of pearl was used to embellish silver pieces. Mother of pearl was also immensely popular in China during the Shang and Ming Dynasties. Finally, in the Americas, Native American tribes regularly traded mother of pearl and used it to create beads and jewelry.

IN RECENT YEARS, SCIENTISTS DISCOVERED A PLAQUE WITH A MOTHER-OF-PEARL INLAY FROM MESOPOTAMIA THAT DATES BACK TO 2500 BC.

How is Mother of Pearl Different from Pearls?

Both mother of pearl and pearl gemstones are made of nacre, but mother of pearl refers specifically to the nacre-coated inner-shell of the mollusk. Pearls, on the other hand, are made completely out of nacre. When an irritant gets trapped inside a mollusk, the mollusk, in order to protect itself, coats this irritant with layers upon layers of nacre until it develops into a pearl three to four years later.

The Difference in Supply and Availability

In addition to the difference in composition, mother of pearl and pearls also differ in their supply and availability. Especially compared to mother of pearl, pearls (like Akoya, South Sea, or Tahitian pearls) are much rarer. While most mollusks produce mother of pearl, the same cannot be said for pearl gemstones. In fact, only a very low percentage of mollusks produce pearls. Even with advances in pearl cultivation that create ideal conditions for pearl development, an oyster or mussel developing a pearl is never guaranteed. Lastly, more species of mollusks are able to produce mother of pearl, while only a few types have the ability to create gem-quality pearls.

READ MORE:  How Much are Pearls Worth? An In-Depth Answer

Value of Mother of Pearl Jewelry VS Pearl Gemstone Jewelry

There is no doubt that pearl jewelry has a level of luxury, elegance, and sophistication that is not offered with mother of pearl jewelry. The pearl necklace, for example, is considered one of the most iconic pieces of jewelry for all time. Pearl jewelry is often strung using multiple matching gemstones that are carefully selected. Pearl jewelry likes necklaces or pearl bracelets is considered much more high-end, and as a result, is exclusively found at fine jewelry retailers. Pearl jewelry can be used to complement a variety of different styles and outfits, both casual and formal occasions.

DID YOU KNOW? PEARLS WERE THE PREFERRED GEMSTONE FOR SOME OF THE MOST NOTABLE WOMEN IN HISTORY INCLUDING PRINCESS DIANA, JACKIE KENNEDY, AND COCO CHANEL.

Many people often settle for mother-of-pearl jewelry because
they believe pearl jewelry is too far out of their price range. However, this
is not always true. At Laguna Pearl, we import directly from high-quality pearl cultivators throughout the world, allowing us to cut out the middle man and offer our customers the lowest prices on all types of pearls. Instead of cutting yourself short, browse through our extensive collection of pearl jewelry to find a piece you love that fits your budget and style.